Water heating isn’t typically pointed out as an energy-intensive process in our daily lives, usually eclipsed by stuff like electrical appliances, air conditioning and home heating. But, little do we realize that it takes a lot of energy to keep hot water flowing through our taps.

In fact, water heating is the largest contributor to greenhouse gas emissions from an average Australian home. Why is this so? Don’t we only use the most hot water while bathing and those morning bathroom chores?

While the bulk of our hot water uses are restricted to fixed bathroom rituals, a hot water system has to keep the water at room temperature all year round, which requires energy. Water heating sucks up a lot of power from the grid during the winter months, but doesn’t exactly stop in summer either.

You can however take control of your water heating requirements with solar hot water systems which are both fairly efficient and more economical than PV systems.

What are Solar Water Heaters and How Do They Work

Solar thermal has been around for a long time now. The earliest use of solar energy can be traced back to the Greeks, when Archimedes used parabolic mirrors to turn sunlight into a death ray and set Roman ships on fire in 212 BC.

Today, large solar farms use essentially the same (albeit highly refined) method by using giant mirrors to reflect sunlight into a collector, which boils water to steam, which then runs a turbine to create electricity.

Solar water heaters for residential use work slightly differently. Unlike photovoltaics which use light to knock electrons out of silicon atoms to produce electricity, solar water heaters transfer heat from the sun into water. Electricity is neither required nor produced here.

Three types of solar water heaters are available for residential use: 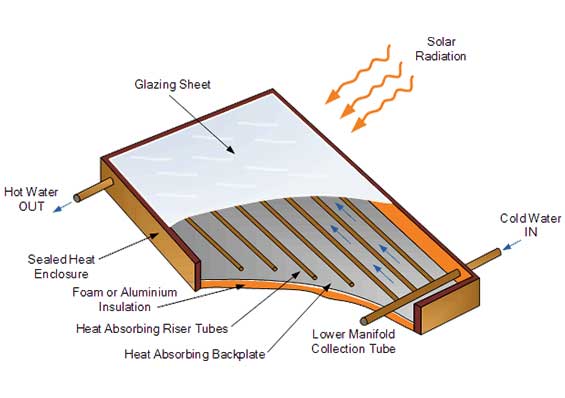 These are the simplest and most popular types of solar water heaters and consist of an insulated metallic box with copper tubes running through it. The box (AKA, the collector) absorbs heat from sunlight and transfers it into water flowing through the copper tubes.

Most flat plate collectors also come equipped with a storage tank on the top. 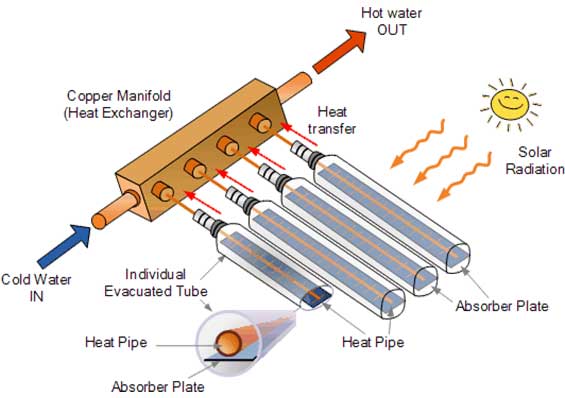 While flat plate collectors are simple and affordable devices, their design doesn’t allow maximum heat retention and transfer. Space between the tubes allows the heat to escape. Evacuated tube collectors fix this problem by doing away with the box and insulating the tubes.

They are called “evacuated” because the tubes consist of an outer and an inner lining which either have vacuum or fluid filled spaces between them. This design makes for a very efficient heat exchanger which is why evacuated tube collectors are ideal for colder areas. 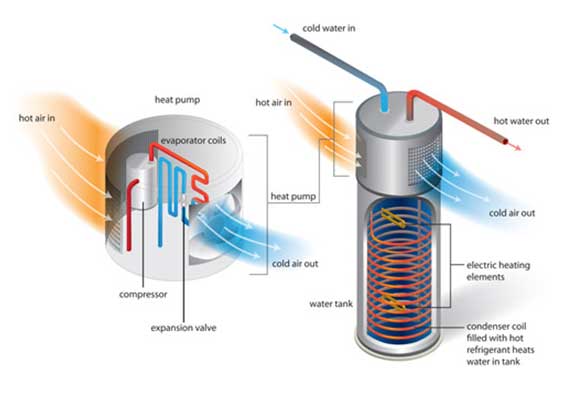 Heat pump water heaters are a bit more complex than the ones discussed above, but they work on the same principle. Kind of. In a heat pump, ambient air is used to heat a refrigerant which is then used to heat water in a storage tank.

Air is simply allowed to pass through a coil which has the refrigerant flowing through it. As the refrigerant gas heats up, a compressor compresses it and directs it to a coil around a storage tank. It’s easy to think that heat pumps aren’t solar per se as they don’t require sunlight but since we’re using regular air which is being heated by the sun, it does still qualify as a solar water heater.

While the compressor will use electricity, it’s way lesser than what a typical gas powered water heater, making them far more energy efficient.

Should You Go For a Water Heater?

Solar water heaters aren’t as expensive as PV systems, but they do take up space. And, if you’re also intent on getting a PV solar power system, then it may also heat up your water supply. You certainly can go for both types but that really depends on your requirements.
Since you have to make sense of your electricity usage to decide which option to go for, it’s best to talk with a CEC accredited solar installer to help you out here.