What are Single Phase and Three Phase Solar Power Systems

One of the key questions we see all the time is how solar panels work in relation to the number of power phases coming into a house. It’s a good question as the number of phases your home has will decide the kind and size of inverter you must attach to your solar panels. Since you intend to sell electricity to the grid, your inverter has to dump your excess load too.

It is crucial that you work with your solar installer to figure out the right kind of inverter and approach for your home as it can help you save big in the long run.

What is an Electricity Phase?

In electricity grids, power is delivered via the most efficient method possible to minimize wastage. The number of phases given to a building therefore depends on how much power they (are expected to) require. Most residential units only use light appliances, and heating and cooling systems which aren’t all that demanding. Commercial and industrial users on the other hand require a lot more power.

Electricity phases essentially help the grid get the required power to each endpoint. A single phase system has two wires – one live and one neutral. The live wire provides AC power, while the neutral returns the electricity back to the source to complete the circuit.

Single phases are what most homes have coming in. A single phase wire has limited load-bearing capacity, and therefore can only be used for simple electrical uses. Since a one phase system is supplying a single AC current of 230 Volts and 50 Hertz, the power output isn’t constant and drops to zero at regular intervals. Machines using single phase electricity require additional electrical components to compensate for this. 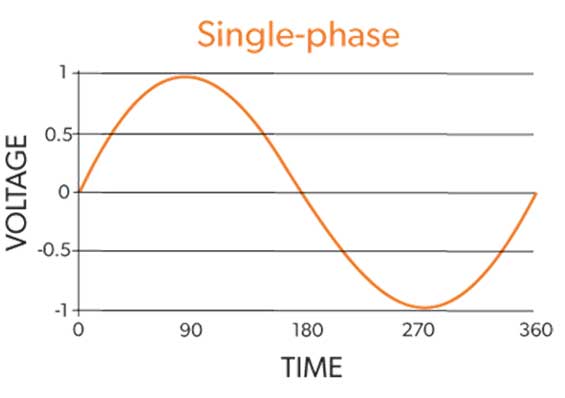 Three-phase electrical systems on the other hand have three live wires coming in and one neutral wire going out. A three-phase system supplies three alternating currents. The peak of each phase is separated by that of the others by only one third at any given time, allowing for a near continuous flow of power throughout the circuit. In Australia, three phase power lines run at 400 Volts and 50 Hertz. 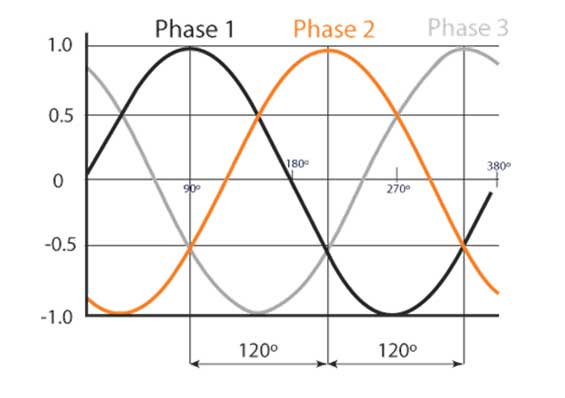 Also, since three wires are supplying power here, the overall load bearing capacity of the system increases exponentially. There’s more room to send electricity without overburdening each of the wires.

What Does All This Mean For Your Solar Power Project?

As we stated earlier, the number of phases your home is receiving will determine the kind of inverter you should get. While your choices in case you have a single phase power are limited to single phase inverters, things become a bit more complicated when dealing with three phase systems.

A three phase power system gives you a bunch of choices. You can either go for:

Indeed, you can simply attach a single phase inverter to one of the three phases that are coming in. Many people mistakenly think this can adversely affect their bill. Since the power’s only being bought and sold on one phase, the current flowing through the other two won’t be used to calculate their bill, they fear.

This is a common, albeit fallacious assumption. Your monthly bill is calculated against your complete electricity usage, so the total output of all the three wires is used in net metering.

A good solar installer will hook up your solar meter with the phase which has the highest or the most stable load. A bad one may actually configure an inverter in such a way that it only does business with a single phase, as you feared! So, it’s critical that you hire a trustworthy solar installer.

While a single inverter doesn’t affect your monthly billing, it can cause load balancing issues if installed incorrectly. Remember, the load on all the three wires in a three phase system should always be the same. Imbalanced loads can cause the inverter to trip frequently.

A solar inverter is the most costly part of a solar power system after the panels. If you do have a three phase power feed, then you are confronted with some important decisions. You can save some money by going for a single phase inverter.

But, there’s a chance this can lead to frequent power trippings and voltage fluctuations.A three phase inverter is ideal, but they cost more. Not to mention, there’re a plethora of brands and products to choose from.

Let’s not forget, you’ll have no way to know how your installer has configured the inverter unless you have technical expertise or if you went for a third party review.

These are exactly the kind of problems we at bidmolar™ specialize in shooting down. We’ve helped our customers save an average of $3,100, all while getting the best possible deal for their unique requirements.

Interested in finding out more? Check out how we work or give us a call if you have any questions for us.